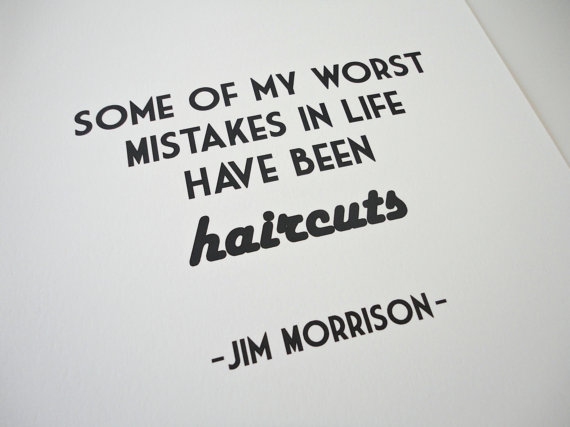 I was always into dance performances when I was in my teens. I would participate in local dancing competitions, school functions, Independence day parades and so on and so forth. There were two issues which presented themselves during these dance performances, which make me slightly discount the endorphin, adrenaline and serotonin high I got from those performances.

Firstly, the dances were of the nature which required a girl to have hair which could be tied into a bun. In those days, I used to get an embarrassing haircut called the ‘Mushroom cut’. Till date, I don’t know what possessed me to get those haircuts. I looked good in them, but it was not me. I would get those haircuts and then spend the next few months defending the haircut. There is an unsaid rule in my life that only I can make myself feel bad about my hair. No one else can.

Now most of these dances were of a traditional nature where we had to wear saris and artificial jewelry along with ‘alta’ which is a Bengali red dye applied on hands and feet(imagine Madhuri and Aishwariya’s look in Dole Re song). We wore big bindis and five kilos of makeup. I didn’t have an issue with makeup, but it clashed with my mushroom cut look. It presented me in a bad light, as if I was deeply confused about my identity in this world. Was I the spunky chick who sported a funky hairstyle, but had decided it is not sanskari for me to do so? Or was I the traditional young lady on a rebellious streak, who would just rebel in small ways and not do anything too drastic to upset the other traditional people? Still trying to figure out what that look meant.

I had to use false hair/artificial bun to make things easier for the audience. I now know from experience that it plopping a bun on top of your head, while the rest of your hair falls naturally into a mushroom cut look, makes you look slightly retarded. It looks like an ice-cream cone, with the scoop being too large for the rest of the cone, maybe because the scoop wanted to make a loud statement just like Rakhi Sawant. This ice cream cone look didn’t have any particular impact when it came to my dance performance.

Once I had used false hair for a performance. In the middle of the semi classical and eloquent dance steps, my false hair decided that it had had it. It just slipped effortlessly on the floor. I picked up the false hair, in a series of dance steps to make it look choreographed. and then slipped off the stage as if that too was planned. I then frantically clipped on the false hair, mumbling a few curse words(which were of an innocuous nature at that time and mostly included donkeys). I then slipped back onto the dance floor quite shamelessly, as if the last seconds of my life had never happened.

Secondly, I detested the fact that they made me Mahishasur(the obese devil with a big handlebar mustache whom Goddess Durga killed, which is why we got ten days school holiday every year). Yes, so in a way, I was responsible for those holidays. You can thank me and send me gifts if you want. But, I could never understand why I was picked as Mahishasur. Was I a natural for the part? I did have fairly bushy eyebrows till I started getting them threaded. The confusing part was that I was Mahishasur but I had the Dole Re look, with the ice cream cone bun and everything. For people, the question ‘Who am I?’ comes after a lot of spiritual and deep meaningful years of pondering. For me, I think the seeds of doubt started sprouting after these performances.

We were once performing on a huge ground on the occasion of Independence day. The sequence was such that I had to dance normally, then fall under the Goddess’s foot on a particular cue for her to kill me(it always felt like walking and then fainting under her feet for a few seconds). After she killed me, I had to get up and start dancing again(maybe this was the afterlife dance). I had rehearsed this fainting and afterlife dance sequence enough number of times, so much so that I stopped feeling humiliated about why they chose me for the part. But…..I don’t know what came over me that day. I decided to fall at the Goddess’s feet a few seconds earlier. Maybe this is what the inevitability of death means. You know it, so why fight it? She got confused and mentioned that I was before time. This was the only time in my life when being before time led to the air being distraught with panic and utter directionlessness . After a few awkward moments later of sheer inactivity between me and the Goddess, I was killed by her.

If you find me sobbing uncontrollably at a hair salon if my hair gets cut too short, you know why.

So, I start going for a few dance classes at my gym. I want to believe that I am a decent dancer, so I avoid looking at the mirror(which is on my right). Ignorance is bliss. Delusion is Heaven(don’t buy into this. I am just getting carried away).

I go for a Zumba class. This lady who is in flawless shape puts on the music and starts instructing us. We allow ourselves to be instructed, thus maintaining the decorum of the class. There is no mention of any kind of fish market from her, so I assume she is happy with us, although the music is so loud that I forsee fish market people saying ‘What is this? A Zumba class?’ sometime in the future.

She dances really well and we try to follow her. Then she adds in her instructions ‘Be sexy. Like a tigress.’ Now I have been a human being all my life, so I try hard to ape her. I can see that everyone else is also trying hard. You can tell when one is trying hard when they have strained expressions(inside the bathroom or outside). 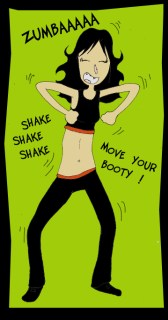 She shouts ‘Sexy tigress.’ We take it that we are doing well. Pardon me as I decide to speak for the whole class. She gets flustered and shouts ‘tigress’ once again. I am trying hard to coordinate my left foot, right arm, left eyeball and my ponytail while still trying to feel and look like a tigress. A tigress with love handles.
I don’t think that a tigress can do all this shit at once, while trying to look like a human being.

Then she exclaims ‘Tigress. Not Hello Kitty.’

So much for the sexy moves. Come to think of it, I always liked fluffy cats like Garfield better than some tigress who multitasks.